Master Deshimaru and Zen in Europa

A reportage by the Zen monk Stanislas Komyo Wang-Genh.

Buddhism was discovered by the West in the 19th century and since this time has attracted great interest : this was the start of Buddhist studies, the first translations, and the engagement of certain intellectual milieus. The Zen tradition became known a bit later through the works of Daisetz Suzuki, which were very influential before and after World War 2. It was more or less an intellectual approach based on the Rinzai Zen tradition. As for the practice of Soto Zen, it spread in the West from the 1960s, first in the USA then in Europe with the arrival in Paris of Master Taisen Deshimaru in 1967.

The Reverend Taisen Deshimaru (or Yasuo, his birth name) was born in 1914, near the town of Saga on the island of Kyushu. His father was a notable, who was in charge of the local fishing syndicate. His mother was a fervent devotee of Jodo Shinsu Buddhism, of the Pure Land school, founded by Shinran. She transmitted her faith in this school to him. He was also influenced by the ideas of bushido which was widespread in Japan at that time, particuarly in the town of Saga, which was very high in samurai spirit. 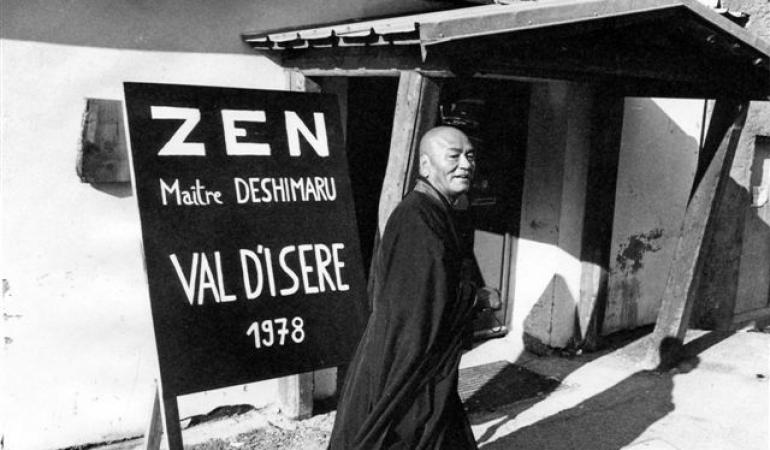 In 1935, whilst he was following studies in economics in Tokyo, he started to practise Soto Zen with Kodo Sawaki Roshi, one of the great Zen masters $ of the 20th century, who was at that time godo (an instructor of monks in a dojo) at the temple of Sojiji, one of the two principle temples of the Soto Zen school He wanted to become a monk, but Sawaki Roshi encouraged him to continue to practise as a lay person, which he did for the next 30 years. During the war, where he didn’t fight due to short sightedness, he spent several years in Indonesia,and went back there later.

In 1965 before he died, Kodo Sawaki ordained him as a monk. Taisen Deshimaru felt that he had finally resolved  the contradictions he felt between the spiritual and material aspects of life and  between the teachings of Jodo Shinsu and Zen.

In 1967, invited by a French macrobiotic group, he came to France, where he threw himself whole heartedly into teaching zazen and the Zen tradition. It was just the right moment and his mission rapidly grew. In a few years, he was giving more and more seminars and practical sessions, he had translated fundamental texts of Zen, published his works, and created the European Zen Association, (which later became the international AZI). The number of his disciples grew and he set up several practice places. At the same time, his activities were also known in Japan. He received dharma transmission from Yamada Reirin Roshi in 1970 and was named Kaikyosokan (in charge of missionary activities) for Europe in 1976.

From that moment, his missionary work grew and culminated in the creation of the Zen Temple of La Gendronniere in 1979. At the same time, the growing number of disciples, the work of teaching and adapting the tradition, the management of the whole, necessitated even greater efforts. He had a project to bring more Japanese teachers to help him, but he fell ill in 1981.Taisen Deshimaru Roshi died of the effects of cancer in Tokyo on April 30th 1982.
Endowed with exceptional energy, Taisen Deshimaru Roshi was animated by an unshakeable faith in the practice of zazen, in the pure teaching of the buddhas and patriarchs of zen, and in the importance of this practice and these teachings for civilisation in the future. Although he never named a direct successor and never gave transmission (shiho) he transmitted his faith to many disciples he had trained, amongst whom he had singled some out as future masters.

Founder of Zen in Europe,Taisen Deshimaru in this way implanted a long lasting and living tradition of Zen in a new land.