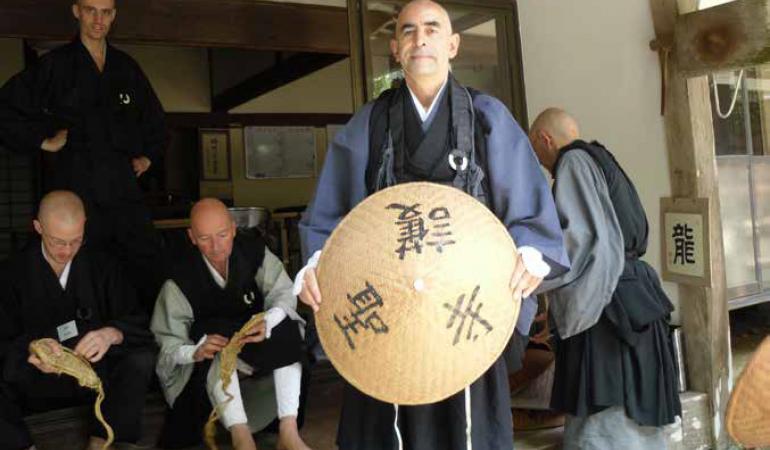 Question: Do you remember your first sesshin?

Dominique: My first sesshin was at the Zen temple of La Gendronnière, 20 years ago. It was also my first experience with Zen. I had come on foot with my backpack from the Onzain train station, happy and without preconceived ideas. There were about 300 people and, at the time, beginners weren't really taken care of. So I went along with the activities as they came. Zazen after Zazen, I went deeper. The sesshin was directed by Olivier Wang Genh. I remember befriending several members of the sangha of Strasbourg, which helped my immersion in Zen. I also remember the first time I received the kyosaku! It was surprising, I wasn't expecting it...

Question: What was special for you about this first sesshin?

Dominique: I was staying in a tent where there was also a Belgian who came with his two young children of 3-4 years old. At the time, there were not yet family sesshins as they are proposed today. We took turns in the tent to look after the children while the others went to Zazen.

Otherwise, I also remember that my recorder had been stolen. During one of the mondos, Master Wang-Genh asked a guy what he did for a living. He answered that he was a thief. Everybody laughed. I thought maybe it was him!

Question: Do you remember what fascinated you about Zen during that first experience?

Dominique: I came to La Gendronnière with the idea of finding a place to practice. I was especially touched by the teachings and also by the approach of the posture. I didn't have a good posture at that time, and I realized that I needed guidance. Until then, I had a personal search, not really a path. I was traveling in India, practicing yoga, Vedanta meditations. I was looking for things from different masters to build my own practice and I realized that it was leading nowhere. It was at La Gendronnière that I decided to really choose a path.

Question : And after that, there was very quickly a sequel?

Dominique: This first experience during the summer camp was quite exciting and in the fall, I came for a month to the Weiterswiller temple. Then I went to India because I had already planned a stay and there I really decided to come and settle here when I would come back. I was able to do so one year after this first sesshin thanks to a contract with the town hall of Weiterswiller to have an income.

Question : It's interesting to hear how it started.

Dominique. There is a story before and a story after. Among those who have lived here for many years, many have returned to social life. They left to go back to school, got married, found a job, etc. They keep something of what they have lived here in them and it is not impossible that they will come back. I think that there is something very special, very true in this practice, which goes beyond the common decisions, the decisions of life.