In this section you will find some of the sutras (teaching texts) sung during the various sôtô zen ceremonies. These texts originate from several countries : India, China and Japan. They have come down to us in japanese or sino-japanese, the language in which we still sing them.

The sutras are texts attributed to great buddhist masters like Nagarjuna, Eihei Dôgen and Sekito Kisen.
Sutras are chanted in unisson, mostly on a single note. Some ceremonial texts are mantras.

According to Wikipedia's definition mantra is a sanskrit term meaning deliberation, a mystical formular or spiritual tool. It is formed from the verbal root man (think) and the suffix -tra, which indicates a neutral noun accomplishing the action in question. The aim of the mantra is to canalise mental activity. Its virtues, when realised through the reciter's concentration, are beneficial. The mantra is an audible and rhythmic formula based on the repetition of sounds believed to be beneficial for body and spirit.

The text most commonly sung during ceremonies at Ryumonji and the dojos. 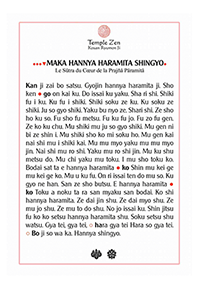 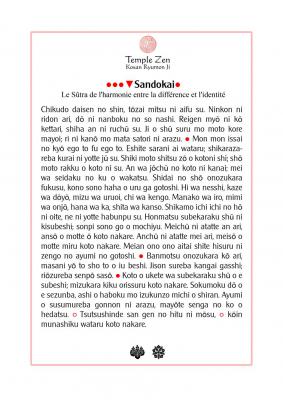 A mantra sung regularly in temples and dojos particularly during memorial ceremonies. 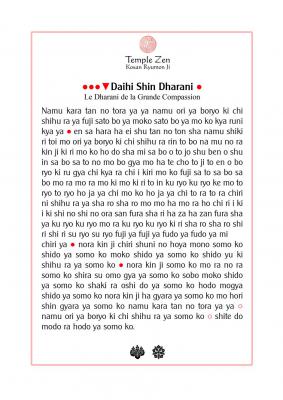 Written in the 9th century by master Tozan Ryokai (807-869), the Hokyo Zanmai discusses the pure consciousness of zazen. The title means "the precious mirror samadhi" 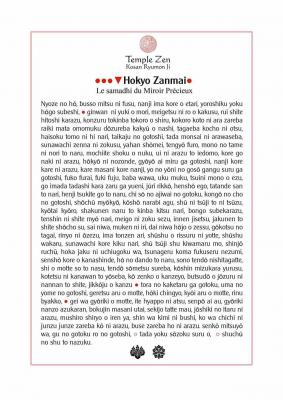 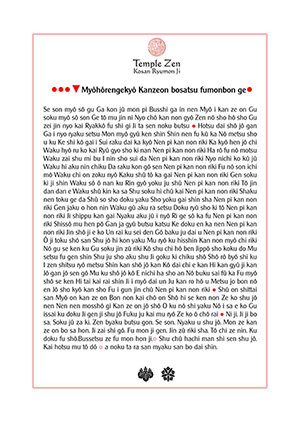 LINEAge OF PATRIARCHS CHANTED IN THE MORNING